Showing posts from March, 2021
Show all

Food freshness is important to a domestic cat 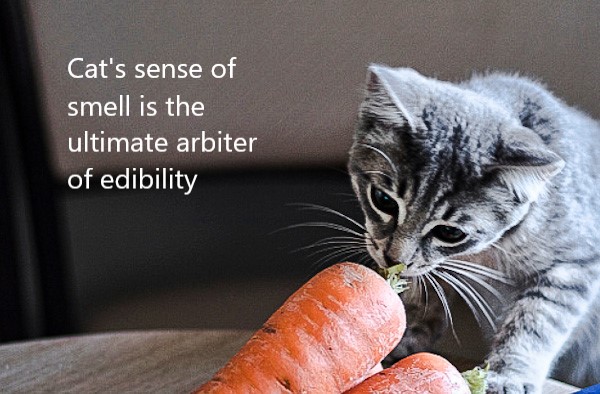 I ran a little tests today to see how critically important food freshness is to a domestic cat. My cat likes king prawns. I treat him with them from time to time. I have one packet which has three days left on its sell by date so they are perfectly fresh and edible. Food freshness is important to a domestic cat. Image: MikB based on image from Pixabay. Today I bought a fresh packet, straight off the shelves of Sainsbury's. I gave him some prawns from the older packet and he rejected them. I gave him some prawns from the fresh packet and he gobbled them up. Both were highly edible but he entirely rejected one and loved the other. And of course he checked them out with his nose. The first thing that a domestic cat does when eating food is to smell it. The cat's nose is the arbiter of whether food is good or bad, edible or inedible. This is why they will pick up the smell of a pill inside food and reject all the food or just the pill. I don't think humans have yet fully gr
Post a Comment
Read more

Punishment vs divine intervention in training your cat 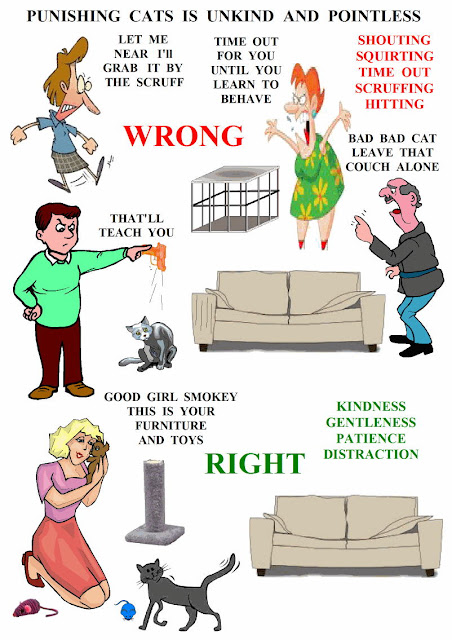 This is a short note about the difference between punishment and divine intervention. The concept was introduced for the first time, I believe, by Dr Bruce Fogle. I think it's a fantastic concept. It's important for cat owners to know the difference. Cat owners want to train their cat to avoid doing certain behaviours but they don't want to punish their cat. Or they shouldn't.  Punishment vs divine intervention in training your cat. Poster: Kattaddorra. Punishment is pointless in cat training. In fact it's worse than pointless. The concept of punishment is about people and training people to behave differently. But it depends upon an understanding of what social norms are. It depends upon an understanding of what morality is and how a person compares their actions with what is required in society. All these factors are beyond domestic cats. And you can't punish a domestic cat because they're behaving instinctively and therefore naturally because it is cru
Post a Comment
Read more

Singaporeans conspired to abandon 16 cats on the street 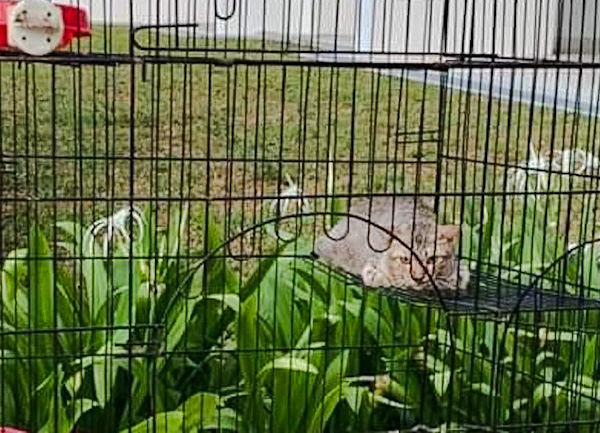 NEWS AND VIEWS: Nur Hajjar Osman, a 35-year-old woman, was no longer able to care for her 16 cats. She decided to get rid of them by simply abandoning them on the street. She conspired to do this with what appears to be a friend whose name is Muhammad Haidhar Zulkifli, aged 33.  Singaporeans conspired to abandon 16 cats on the street. One of the captured cats. Photo: Sayang Our Singapore's Community Cats/Facebook On 28 February 2019 Nur Hajjar Osman asked Muhammad Haidhar Zulkifli to get rid of the cats. On 1 March 2019 he arrived at her flat in Punggol and they brought the 16 cats down in five cages. They loaded them onto a lorry which he had borrowed. They drove around and decided to release the cats in the vicinity of 222A Sumang Lane at around 3 AM. Members of the public noticed what was going on and apparently reported it. The cats were found and rescued. They were successfully prosecuted and Nur Hajjar Osman was fined $4000 on 10th March. Muhammad Haidhar Zulkifli was also
Post a Comment
Location: Singapore
Read more

NEWS AND COMMENT: A man living in Kazakhstan (first name: Arman, 33) has admitted to police when in custody to feeding the flesh of his neighbour, Daniyar, 37, to stray cats outside his window. The good point is that he likes cats! Sorry that's too flippant. The bad point is that he decided with his neighbour to have a drinking session at his apartment. They bought several litre bottles of vodka and began to drain them of their contents. Unsurprisingly it started off as a nice pleasant drinking session albeit heavy but deteriorated into an argument which further deteriorated into violence and to the point where Arman stabbed Daniyar to death with a kitchen knife.  Man confesses to feeding human flesh to stray cats outside his window. Blood on window frame. Pic: Astana TV. Not satisfied with that act and being concerned about the stray cats outside his apartment window he cut off bits of flesh from Daniyar and fed the stray cats by throwing the flesh through the window to the cat
Post a Comment
Location: Karagandy 100000, Kazakhstan
Read more

Can FIV-positive cats go outside? 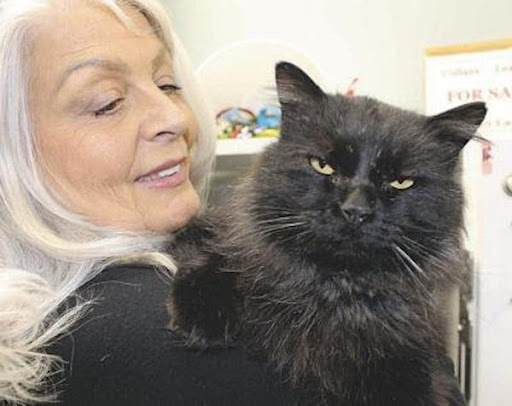 Can FIV-positive cats go outside? The question is a moral one and it is asking whether it is sensible to allow a FIV-positive cat to go outside where they might transmit the disease to other cats. The answer is that it is not sensible or moral to do so although it is quite hard to transmit this disease. It is agreed that the most likely form of transmission is through male cats fighting. When they bite each other their saliva is injected into the other cat. The saliva carries the disease. Deborah Bell, former Carthage Humane Society executive director, holds Fritz, an FIV-positive cat featured in a Globe pet column. Photo: Globe | Kevin McClintock It is further believed that about 2 to 4% of cats in the general population in America are affected by the disease. The incidence is highest in male cats in the age range 3 to 5 roaming outside. These are normally indoor/outdoor cats or outdoor cats. They get into fights with other male cats over territory. I remember feeding a male cat, T
Post a Comment
Read more
More posts