Piebald Gene - what does it mean? 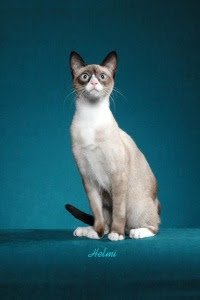 The piebald gene is gene that produces an animal with patches of white fur. It is semi-dominant and indicated by the symbol S. The "painted" horse is a classic non-cat example. The bicolor cat is a cat example. It is also called the white spotting gene. Cats that have the piebald gene are common. It affect any color of cat. It is variable in how it works. There might be lots of white or small amounts. The tuxedo cat is an example of a cat with a small amount of white fur produced by the piebald gene.

Breeders of cats grade the amount of white between 1 and 10. At 10 the cat is white and at 1 the cat is black. The medium grade white spotting is found on many cat breeds while high grade spotting is seen on the Turkish Van. Some medium grade and all high grade white spotted cats are homozygous SS. Low grade and some medium grade white spotted cats are heterozygous Ss.
If you're a cat breeder you'll need a moderate knowledge of cat genetics to exercise some degree of control over what you're doing. I'm guessing, but I would think that most breeder's knowledge of genetics is based more on practice and experience rather than academic study. Although some have a high degree of knowledge.

My reading about genetics clearly indicates that research is still being carried out on cat genetics; there is still a lot to know.

In order to build a page for the PoC website on the Snowshoe Cat I had to discuss the bicolor gene (mainly) and the Himalayan gene. This is because the overriding feature of the Snowshoe cat is the amazing coat pattern that is controlled by the genes brought to the cat from her parents, which are the American Shorthair Bicolor and the Applehead (Traditional or classic) Siamese. The Snowshoe is a hybrid cat and a rare cat.

The Bicolor gene is found in the Bicolor American Shorthair. As you guessed bicolor means a cat of two colors, white and another color. 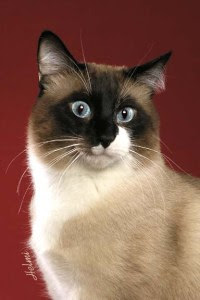 It is thought that there may be more than one type of WSG and that it is this that produces the variation in the pattern from cat to cat.


The gene that gives the Siamese her trademark pointing (dark extremities) is the Himalayan gene. This gene is recessive and therefore both copies of the gene need to be present in the cat to create the pointed coat.

This gene is also heat sensitive and that is why the extremities are darker than the torso of the cat. The torso is warmer than the extremities due to the distance the blood has to flow from the heart. The face is also cooled by the sinuses apparently.

When you combine the Himalayan gene and the WSG you get the remarkable white blotches on the Snowshoe. They are well defined white patches. The objective for breeders is to create as much symmetry as possible particularly on the face as this is more aesthetically pleasing being more in harmony with the facial features. Although the major registry, TICA, registering this breed wisely does not specify a particular design of marking (e.g. symmetry). The CFA does not as yet recognize th 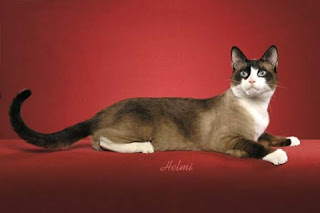 I suspect that this is for the welfare of the cat by avoiding poor breeding practice could be encouraged if there was a breed standard which over-specified the pattern.

Nonetheless through selective breeding over a long time breeders will be able to exercise some control over the shape and look of the pattern. The picture at the top of this article is the desired pattern for the face.

The WSG it is thought is associated with deafness, eyes of different color or blue eye color if those organs are in the areas where the gene is operating. Although I have read conflicting information about this.