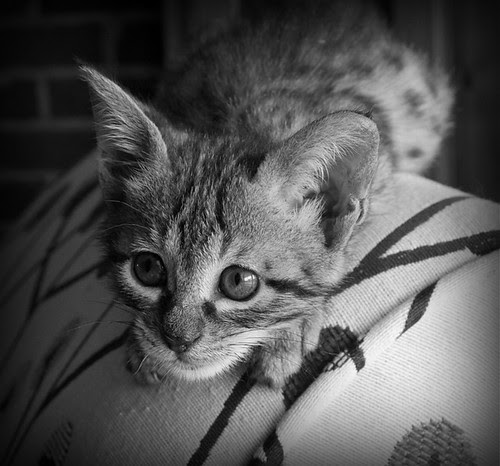 Kitten Stare, a photo by broadsurf on Flickr.
Gorgeous F2 Savannah kitten playing at home. He is being socialised. He has a very intense stare. Perhaps this is the look of a wild cat hybrid.

"F2" means second generation from the wild cat serval. So there is quite a bit of serval in this little charmer. I had lots of fun photographing these kittens. They were very inquisitive and active. What else?

The photograph was taken at the home of Martin and Kathrin Stucki owners of A1 Savannahs. The kittens are socialised at their home. He is playing on one of the chairs. This was a very nice chair. One thing about this chair that we all recognised was dangerous was that it was a recliner and one or perhaps two of the kittens had a habit of crawling into the mechanism space under the sofa. That could prove very dangerous so it was locked into a static position as I recall. This eliminated the danger. This is the kind of thing you have to watch out for when kittens are growing up.

The original picture is in colour but I like it in black and white for some reason. See more Savannah cats and detailed information.
cat breeding cat breeds savannah cat