Picture of Singing and Dancing Cat 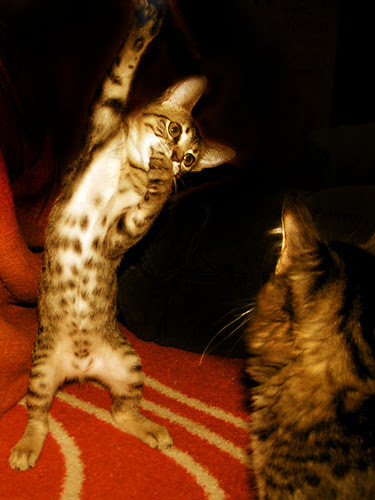 Cat performer, a photo by fofurasfelinas on Flickr.
This is a very interesting photograph of a cat performer who looks like he is singing and dancing. Well, he is definitely dancing, not sure about the singing bit.

The cat dancing is Chihiro and the cat watching is Toji. Chihiro is a tabby cat. He appears to be a spotted tabby. The white underside is typical of the wildcats incidentally.

In reality Chihiro is probably just playing with Toji and is about to pounce on him.

The photograph was taken in Porto Alegre, Rio Grande do Sul, Brazil. The photographer is Giane Portal. She is probably the best known cat photographer on Flickr. Her Flickr name is fofurasfelinas. Giane used flash to freeze the action.