Wondered what you cat does at night while you sleep?

Watching this I have a very strong feeling that this black cat wants his human companions to bloody well wake up and join the cat world where cats are active at night.

The poor guy desperately wants human interaction at time when humans are in cloud cuckoo land. I feel sad for the cat. It is an example of how in one clear aspect of cat and human life we are at polar opposites. Humans sleep at night. Cats run around looking for prey at night. And if they are full-time indoor cats it's double trouble because there is nothing to do. Full-time indoor cats rely on their human to entertain them most of the time. Unless it is a multi-cat home. 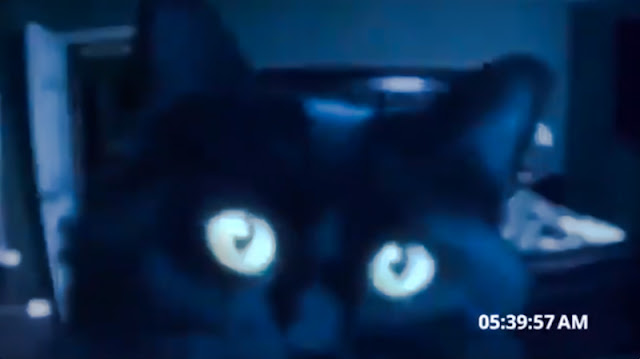 This is the brilliant screenshot. This cat of the night notices the security camera which is on time lapse and investigates. His owners are oblivious to his activities. Well, they were until they watched the video. Nice idea by the way.

What we see in the video is one of the great difficulties or barriers to living with the domestic cat. Although they are active during the day and night in general domestic cats prefer to hunt at night and/or at dawn and dusk. These are times when their prey animals are most active. They have inherited this from the wildcat.

The European wildcat does most of its hunting at night. And so we have a cat here in the video who is programmed to hunt at night but there is nothing to hunt. He or she is active in other ways because there is energy to burn. And throughout the day they will snooze for hours. I think that it is fair to say that the domestic cat is in this respect out of step with humans. Their body clock is out of sync. with hours. The video shows usual cat behaviour. It happens across the planet millions of times every night.

Feline activity in the bedroom is one reason why quite a lot of cat owners lock their cats out of the bedroom at night. I think that this is unfair because the bedroom contains a lot of the scent of their human companions. Therefore it is an important part of the home because they like to be within that scent as it reassures them. They feel happier connecting with us through our body odour. So when you lock them out you remove that enjoyment from their lives. I would argue that it is an unfriendly act and not in line with good cat caregiving.

Cat caregivers simply have to get used to their cat being active in the bedroom at night. Or lying on the bed and getting in the way. It's a question of the human adapting to the presence of their cat. Domestic cats adapt to our presence and our lifestyle so it's only fair that we reciprocate.

Note: This is an embedded tweet. Sometimes they are deleted at source which stops them working on this site. If that has happened, I apologise but I have no control over it.